It is noticeable that in traditional way of wood sawing in industry the logs are moved, for example by a conveyor, and fixed by grips or claws to a cart and moved across a band saw cuts the first plane. This initial plane is usually not well aligned with the axis of growth of the tree, so all subsequent cuts aligned with this first one will not be aligned with the nucleus, and consequently all planks obtained will have their fibre slightly misaligned. 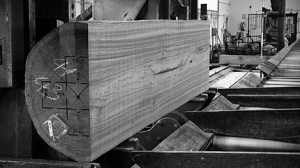 On the other hand, it is possible to find sawmills with the necessary technology to align the centre of the nucleus with precision at one end of the log before cutting the first plane, but for this to be really useful, it would be necessary to do so on both ends.

So I think that, since the logs show more or less strong deviations of their growth centre in relation to their geometrical centre, taking some simple measures they could be drawn into the band saw aligned precisely on both ends; this would produce wood with aligned fibre, independent of the original misalignment of the nucleus of each log.  This is very seldom found in industrial processes, but as a sculptor I believe this would represent a big advancement in the wood transforming sector, achieving a higher quality.

Thanks to the contribution of the scientists and prestigious experts that have worked with me over the past years I have managed to develop a sawing design for its use in exteriors; this design has been verified innovative by the OEPM (Spanish patent office) and has been accepted to the patenting process.

As one can see this cutting design does not take into account the pith to make a sculpture, since it will often generate the well-known heart- or pith cracks, due to the different density in relation to the rest of the log. I would also discard the bark, to avoid illnesses and fungi in the wood, as well as the sapwood because of its different colour which would stand out too much in the overall assembly of the block, and also because it has different characteristics from the rest.

The key feature of the cutting design I have developed is that it must be applied to trunks that have been aligned on both ends, in such a way that when rotated or put together they would necessarily have similar location of their growth rings along the whole piece, or in other words, wooden strips or pieces homologous to their neighbouring pieces in the block’s configuration all along its long axis.

Curiously, when building structural beams one very often finds pieces glued along the heart or tangentially; the purpose of this is to contain the traction during shrinkage and expansion movements. Basically this is a correct theory, in my opinion, since it is based on physics laws saying that diametrically opposed forces of same magnitude annihilate each other, and I would totally agree with this way of arrangement, if it was not for a small detail: from my point of view as a sculptor, in practice there always will be slighter bigger force, and thus tension, in one of the pieces we arrange together.

Therefore, from my experience I have designed a way to build up the block where the pieces, already subject to a continuous movement due to shrinkage and expansion, should not try to fight forces between each other thus generating added tensions and a continuous stress. In this way, in my opinion, we could avoid the pieces from ending up breaking faster than if their forces did not oppose in such a direct way and could free part of the tensions performing the movement inherent to the contraction and expansion.

What I put forward as a result is that, if the pieces must move, they do so without encountering opposing obstacles or tensions, but that they all do so in the same direction and in a similar way, so that tensions within the block are minimized, as far as it is possible.